The Murfreesboro Adult Basketball League is the premier adult league in Murfreesboro hosting some of the best adult players in the area. The league plays four separate seasons at two different locations. The Sports*Com League plays on Wednesday nights and offers a consistent group of veterans. McFadden Community Center plays host to league play on Tuesdays, Wednesdays, or Thursday nights and offers both recreational and competitive divisions. 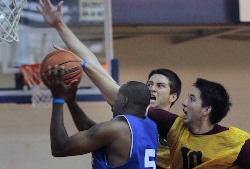 Contact Athletics at 615-907-2251, or email, to get your team in the next league, or join our free agent list as an individual.